A Saintly Dog and a Favorite Saint

Saint Roch is very popular in Europe. You will see little statues of him and his dog, tucked in niches on street corners and in churches, across the continent. You can always recognize St. Roch because his dog is with him, holding a loaf a bread in his mouth. In addition, St. Roch always wears a shell the symbol of pilgrimage to Santiago, Spain (though he was a pilgrim to Rome, the Spanish shell is, and was, a more recognized pilgrim's symbol). He also typically points to a wound on his leg, symbolizing recovery from the Black Plague.

The Black Plague, or Black Death, was probably the worst pandemic in human history: killing an estimated 450 million people around the world; peaking in the 14th Century. It's estimated to have killed 30-60% of Europe's population -- causing profound religious, social, and economic upheavals.

St. Roch interrupted his pilgrimage to nurse people who were sick with the plague, until he himself became infected. He recovered in large part because his dog brought him food and wouldn't give up on him. (Luckily, nowadays the plague is treatable with antibiotics.) It's because he's a patron saint against the plague, that his statue is found throughout Europe. He is also a patron of pilgrimage, and dog lovers like him too! 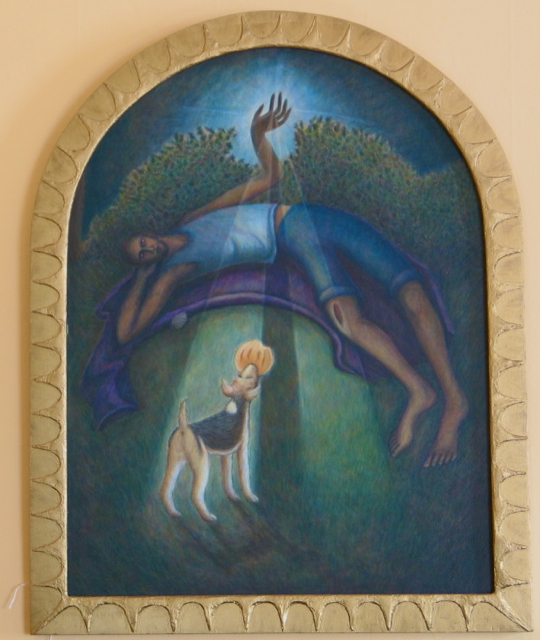 Here is a painting I did St. Roch and his dog. The model for the dog was my beloved dog, Joop.
Joop was kind-of greedy... I doubt he would have shared his bread gladly. But under extraordinary circumstances, he might have risen to the occasion; because despite his naughty ways, he was a good dog... like most all dogs... and a saintly presence in my life, by just being himself. 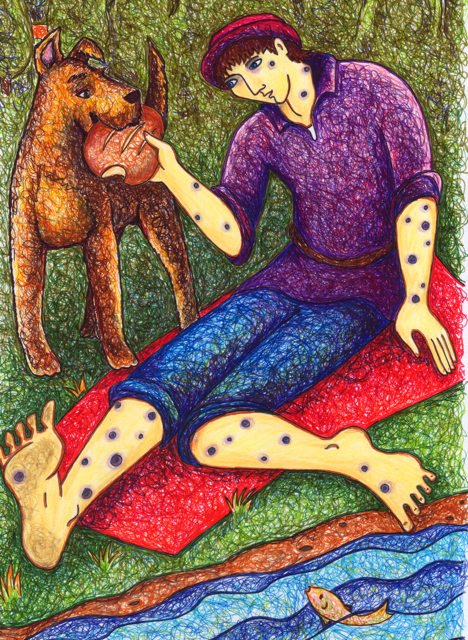 Here's the picture of St. Roch and his dog from Holy Crocodile! Notice how in, both my painting and my drawing, the loaf has a little bite taken out of it. Even though the dog is pretty much a saint to share it's bread -- it couldn't resist having a nibble first. And who can blame it? I'm sure St. Roch shared whatever he had with his dog... just like the dog shared with him.
Posted by Unknown at 11:41 AM 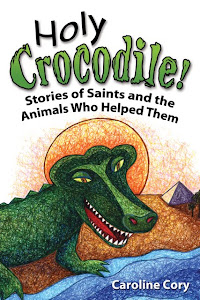